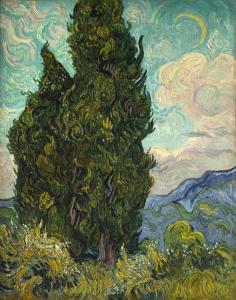 Mr. Van Gogh is a famous Impressionist oil painter known for his thick brush strokes and vibrant colors. His painting were so thick that they could almost be considered high relief sculptures. He would actually sculpt his flowers with paint. This gives another dimension to his paintings called impasto.

Vincent Van Gogh suffered from mental illness and painted many paintings in a asylum which he willingly checked himself into.

We often associate "Van Goghs" with fancy art museums and paintings that sell for millions. However Van Gogh only sold one painting his whole life! He also painted the poor people of his day. Showing how noble they were despite living very lowly lives.

“I can't change the fact that my paintings don't sell. But the time will come when people will recognize that they are worth more than the value of the paints used in the picture.” - Vincent Van Gogh